NVIDIA have finally announced that Intel Corporation, and the world’s other leading motherboard manufacturers, including ASUS, EVGA, Gigabyte, and MSI, have all licensed NVIDIA SLI technology for inclusion on their Intel P55 Express Chipset-based motherboards designed for the upcoming Intel Core i7 and i5 processor in the LGA1156 socket. As a result, customers who purchase a validated P55-based motherboard and Core i7 or Core i5 processor when available can equip their PCs with any combination of NVIDIA GeForce GPUs, including Quad SLI, for the ultimate visual computing experience.

As a result of today’s announcement, NVIDIA SLI technology is now available for all consumer PC platforms, including the Intel Core i7, Core i5, Core 2 Quad and Core 2 Duo processors, as well as those based on the AMD Phenom II CPU.

Things have been on shaky ground with NVIDIA and Intel recently  after Intel dismissed the Ion platform. It appears that the 2 companies have put their differences aside possibly due to the competition from AMD’s entirely in-house CrossFire graphics solution. 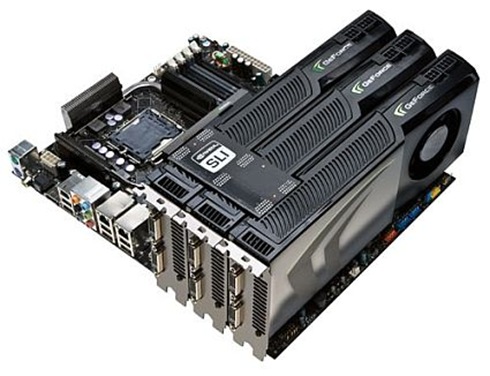